Castles, mansions and religious monuments in the surroundings

You cannot miss a visit to Loket Castle, which is a medieval treasure of Western Bohemia. The Gothic castle with the name derived from a meander of the Ohře river was fondly visited by the Emperor Charles IV as well as his son Wenceslas IV. Although the castle has changed since that time, it is still attractive to visitors. The visite to the old prison that was converted into a museum of torture is very interesting. For those with less adventurous nature, the castle collections offer a museum exposition of china or an exposition of archeological excavations from the neighbourhood of the castle.

Other possible trips and excursions: the sightseeing of the city of Loket and piglet barbecue the old traditional Czech way.

The castle was founded in 13th century on an important intersection of trade routes. The largest development of the castle followed in 15th – 16th centuries, when the owners of the castle grew rich on the mining of silver and pewter. In the Baroque era, the lower mansion was built, where nowadays the Shrine of St. Maurus, the sight of European importance, marked as the second most important historical heritage next to the Czech crown jewels, can be seen.

Join us to see a classicist chateau of Kynžvart with an extensive English park that belonged to the Austrian Chancellor F. K. Metternich. We will have a look at the beautiful castle exposition that also includes the Old Curiosity Cabinet which was established by the Chancellor. The collection of the Cabinet includes over 4400 curiosities from all over the world, e.g. prayer book of Marie Antoinette that she used to pray from before she was executed, Metternich’s child suit, Beethoven’s locket, billiard table and a stand with 8 cues, a gift from tsar Nicholas I or a desk of Alexandre Dumas, père. 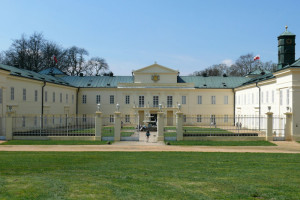 The monastery was founded in the 90s of 12th century. In spite of the fact that the monastery lost its original Roman character during rebuilding in the Gothic and later Baroque styles, the Baroque modifications of the interior according to the Dientzenhofer brothers rank to the most valuable in terms of art. However, the most impressive and valuable is the extensive monastic library which is the most important monastic library in the Czech Republic next to Prague’s Strahov.

Ostroh Castle is mentioned as Seeberg in 14th century.  The castle was one of military bases. A towery gate with a moat, part of peripheral ramparts and palace masonry have been preserved from the original castle. Nowadays, the chateau has undergone complete reconstruction and the visitor may see an exhibition of interiors and furniture or an exhibition of the history of china. An ethnographic exposition shows life of village people in the Cheb region in 19th century.

Other possible trips and excursions: Františkovy Lázně, the natural park of SOOS, Cheb and the castle restaurant of Vildstejn

The national park is located 6 km to the North-East of Františkovy Lázně. Visitors can see peat bogs and black bogs, with a large amount of natural springs and pure carbon dioxide welling in the so-called mofettes – mud cracks. The nature trail 1.4 km long passes across the bottom of a dried up lake which had saline mineral water. You can find a European rarity there, the so-called moler crest – agglomerated bergmeal from the shells of lake algae diatoms settled at the bottom of the lake.

The castle was founded in the middle of 12th century. From 15th century the castle was owned by Cheb burger families. In 19th century it stopped to be used as a mansion and it slowly decayed. Several years ago the ruin was bought by a private entrepreneur, who reconstructed the castle and established, a nice restaurant there, as well as a small museum with an exhibition of local archeological findings.

A half-day trip to the town of Klášterec will take you through an extensive, the English-style park with exotic wood species and to the chateau boasting of its exposition of Czech, Chinese and Japanese porcelain from 16th up to 20th centuries. A walk through the Eugene Spa areal will contribute to the easy-going atmosphere of the day. The history of the spa began in 1881, unfortunately the tradition was broken down in the middle of the last century, and only after 1990 the idea of resoration of the small spa the slopes of the Ore Mountains has come in existence.

The chateau and brewery of Chyše

The stronghold of Chyše was firstly mentioned in the 12th century. Since that time the building has changed its outlook and owners several times. The last owners were the Lažansky family, who lived there until 1945, when the Neo-gothic style manor was nationalized under president Beneš´s decrees. Bad luck for the monument that was set into “the second rank category” of national heritage, which led to its total destruction. The current owners, descendants of the Lažansky family, bought the ruin in 1995 and started the gradual reconstruction. The modern exposition is dedicated to Karel Čapek, who used to be the family mentor to Prokop Lažansky. The current owners are very diligent, the best proof of which is a number of novelties they prepare for every season. Within the chateau areal you can visit the English-style park and the brewery restaurant, where the tasty local beer Prokop is served.

Other possible trips and excursions: the city of Kadaň or Valeč castle

First written documents pertaining to the castle of Valeč date back as late as those of Carlsbad. A number of noblemen were in possession of the castle for several centuries. The last owner of the castle was Dr. Jan Larisch-Mönnich, whose property got confiscated as the result of president Beneš´s decrees. After World War II the building served as a sanatorium for war veterans for a short time, in the 50´s it was a refuge for Korean children and then a children´s home for a longer period of time. In 1976 the house caught devasting fire, which is why the restoring of the object has lasted up to now. A visit to the castle is not a typical visitor´s walk through interiors, it is more or less an examination of several styles of architecture, that influenced its outlook during the restoration.

Valeč is today proud of its chateau park, where 27 sculptures and group of statues from Matyáš Bernard Braun are to be seen.

Join us visiting religions monuments of West Bohemia – Chlum Sv. Máří, the Teplá monastery, the Basilica and the Chapel of the Holliest Trinity of Waldsassen. First we will visit the premonstatensian Teplá Monastery, that boast of the second largest library in the country. Our tour admiring the Baroque sights will be finished in the border city of Waldsassen, well-known for its basilica, the largest of its kind in the whole of Bavaria.

During a half-day trip you can admire the beauty of the Krasny dvur Castle with its wonderful and rich decorated interiors. The original furniture dates back to the 17th and 18th century. The castle is situated in a large English-style park.
www.krasny-dvur.cz

This website uses cookies to improve your experience while you navigate through the website. Out of these, the cookies that are categorized as necessary are stored on your browser as they are essential for the working of basic functionalities of the website. We also use third-party cookies that help us analyze and understand how you use this website. These cookies will be stored in your browser only with your consent. You also have the option to opt-out of these cookies. But opting out of some of these cookies may affect your browsing experience.
Necessary Vždy povoleno

Any cookies that may not be particularly necessary for the website to function and is used specifically to collect user personal data via analytics, ads, other embedded contents are termed as non-necessary cookies. It is mandatory to procure user consent prior to running these cookies on your website.