The Beauty of German and Austrian cities

One-day trip or a two-day trip

Vienna – one of the most beautiful and attractive cities in Central Europe, the current capital of Austria, the former capital of the huge Habsburg´s monarchy.
We invite You to one of the most beautiful city in the Middle Europe. These places impress itselves in your memory. The summer residence Schönbrunn, the baroque pearl – chateau Belvedere or the majestic castle of Hofburg belong indisputably to them. We don´t forget the city symbol – St. Stephan´s Cathedral and the pulsating city centre. We offer then the stop by the buildings of the Vienna´s Gaudí – architect Hundertwasser. Enjoy shopping on the world well-known MariaHilferstrasse.

There are few cities in Europe that can boast of well-preserved historical styles of architecture as Salzburg and Prague. And Salzburg has some more things in common with Prague. In 1997 the centre of the town was recorded in the list of UNESCO´s World Culturel  Heritage, but even more importantly most visitors will remember the genious of music, W.A.Mozart, who was born here in 1756. One will not  be able to get acquainted with the town during a visit of just one day, but i tis quite possible to breathe in the atmosphere of it and probably long to come again.

Germany – getting to know its parts and going shopping

A full-day trip to the Richard Wagner´s city! Meet a city where musical history was written. By walking through the city center you will see the Opera of the Margrave, one of the most beautiful baroque theaters in Europe, the old and new Chateau with a beautiful park, and in the end we will finish our  walk at Richard Wagner‘ s grave.

An all-day trip to the capital of Saxony which was called “Florence on the Elbe” at the beginning of this century; it was the seat of Saxon dukes, royal electors and later kings. In 18th century Dresden transformed into a metropolis dictating the line of European politics. During World War II it became a symbol of apocalyptic destruction. The town was reborn from the ashes and nowadays you can see a world-famous Dresden picture gallery as well as other museum collections that can be found on the newly built premises of the Zwinger or Dresden Castle. You can admire „The Sistine Madonna“, a well-known painting by Raphael, as well as other masters of Italian Renaissance like Giorgione, Titian, masters of 17th century Dutch and Flemish art – Rembrandt, Rubens, Van Dyck or old-German masters Dürer and Cranach. 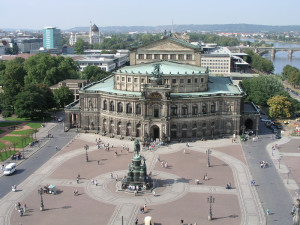 Come with us to enjoy the unforgettable atmosphere of Nurmberg. A full day trip to a Bavarian city with rich history and very close connections to the Roman Emperor Charles IV. and to the painter Albrecht Dürer as well. We will see the most important historical sights together with an astronomical clock which reminds us of the proclamation of the Gold Bull in 1356. You will also have an opportunity to go shopping in the local shops and shopping centres.

A full-day trip to the historical Bavarian city of Regensburg. The city is situated on the bank of the Danube river. During our journey we will visit the dome of St. Peter, patrician houses, churches,  the castle of the princely family Thurn-Taxis, the historical town hall, remains of the Roman fortress Castra Regina  and  other interesting places.
We also offer free time for shopping in v Donaueinkaufszentrum.

You are welcome to visit the UNESCO listed town of Bamberg. The city is world-famous for its wonderful cathedral, in which the grave of the German emperor and emperess Henry is situated. You will admire the churches, castles and gardens from the romanic, gothic and baroque periods.

Munich – the capital of Bavaria, the city of art and culture.  Munich not only breathes and lives a contemporary pace of history, but any visitor can admire the riches of its past, tradition and hospitality on each step. During the excursion you will learn about the history of the place which was under the influence of the ruling house of Wittelsbach for over eight centuries. Its representatives governed the political, cultural, social and economic development of Bavaria up to the end of World War I and had a strong influence on architectonical history of Munich. You can see the unique Cathedral of Our Blessed Lady (Frauenkirche), the New Town Hall, former residence of the Wittelsbachs, Mary’s Square, the Nymphenburg Palace, as well as other sights of this noteworthy city. Possibility of shopping.

We offer you a half-day trip to the small German town Waldsassen (only 7 km from the Czech border). The two brothers from the famous architectural family of Dientzenhofer have built here one of the most beautiful baroque cathedral in the Middle Europe.

A half-day trip to the Bavarian cross-border town of Marktredwitz. We will get you acquainted you with the history of the town which dates back to the middle of 12th century. You can see the Renaissance townhall, the Rococo Church of St. Theresa that was built under the support of Empress Maria Theresa, as well as the New Townhall where J. W. Goethe stayed in 1822. You will also have an opportunity to go shopping in the local shops and shopping centres.

The Bavarian town of Weiden that we would like to invite you to was a cross point of many important trade routes in the past. Especially the so-called “Golden Path” that went through Weiden brought considerable profits collecting toll and taxes to the town. As a result of that, the rich town was able to build an architectonically very interesting historical centre with the unique Renaissance townhall and a lot of burgher houses. Weiden will not either disappoint you if you intend to go shopping – there are many shopping centres as well as shops, where you can buy gifts for yourselves, as well as for your families.

Half-day trip to Saxony.  Annaberg-Buchholz in the Ore mountains is one of the most interesting places in this part of Germany. You will walk through the historical centre and admire the local sights (St.Anna´s church from the 16th century and the local town´s museum). You can also individualy visit the local muzeum.

One-day trip to a city situated on the border between Bavaria and Thuringia, the metropolis of the Coburg dukes. You will get be acquainted with unique architecture dated from the Baroque and Renaissance period, as well as with the castle and fortification from 15th century. You can admire the dukes’ castle with us. The city was visited by many well-known personalities such as Martin Luther, Johann Strauss etc. You will have the opportunity to visit the exposition of the many year´s tradition of toys production in the local museum.

The city of Hof was firstly mentioned in historical documents at the beginning of the 13th century. In our time, i tis a modern town with 50 000 inhabitants that had playe an important role after the end of the World War II due to its favourite location near the Czech border. A refugee campus was set up there, through which more than 600 000 refugees had passed. The next wave of refugees  came in 1989, when some 300 000 citizens of East Germany flooded the city. Nowadays the town is quite popular as a shopping centre.

Chemnitz, the third largest city in the new Bundes states, offers a number of interesting historical monuments. The visitor can also admire the modern buildings. Otherwise, the town can offer many different shopping possibilities.

Probably the most attractive monument in town is the bronze bust of Karl Marx from Lew Kerbel. It is 7,10 m tall and since the year of its forming in 1971, it has been called „Nischel“ the popular way.

Munich, the capital of Bavaria, is connected with many attributes – it represents the pulsating heart of Bavarian economy, or the town of beer. Every year this metropolis welcomes thousands of visitors from all over the world. Munich does not only breathes and lives with the present speed of history, but the visitor can also admire its rich ancient history, tradition and hospitality everywhere. You must order some of the local specialities and do not forget to drink the traditional beer to them. During our excursion you will get acquainted with the history of the site, which has been influenced by the ruling dynasty of Wittelsbach for more than eight centuries. Its rulers have determined political, cultural, social and ecomic development of Bavaria till the end World War I. They played an important role in the history of Munich architecture.

In Bavaria many sites are inseparably connected with the king Ludwig II, who as a ruler did not do anything important, but his creative spirit influenced a lot of buildings, which made him artistic famous all over Europe. He concidered the French king Ludwig XIV as his great example and admired him immensely. He devoted to Ludwig XIV Castle Herrenchimsee, the Bavarian copy of the Versailles Castle. Ludwig II admired most musical compositions of the genius Richard Wagner. Castle Neuschwanstein, called the pearl of Bavaria, was created as a resemblance of one of Wagner’s houses

This website uses cookies to improve your experience while you navigate through the website. Out of these, the cookies that are categorized as necessary are stored on your browser as they are essential for the working of basic functionalities of the website. We also use third-party cookies that help us analyze and understand how you use this website. These cookies will be stored in your browser only with your consent. You also have the option to opt-out of these cookies. But opting out of some of these cookies may affect your browsing experience.
Necessary Vždy povoleno

Any cookies that may not be particularly necessary for the website to function and is used specifically to collect user personal data via analytics, ads, other embedded contents are termed as non-necessary cookies. It is mandatory to procure user consent prior to running these cookies on your website.